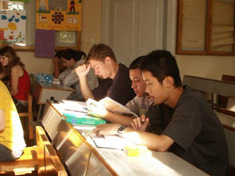 The semester course of Polish language is run twice in an academic year: from the beginning of October to the end of January, and from the middle of February to the end of June. The course is mainly designed for the people who would like to master Polish language in a systematic way. An exam is carried out at the end of the course whose aim is to assess the participant’s knowledge and progress made in the Polish language. The participant receives a certificate of having taken part in the course with the grades from the final exam. On request of a learner the School may carry out an exam, which assesses the level of competence in Polish language. A course begins when a group of 6 persons in minimum is formed.

The course is 4 academic hours per week, most often 2 hours two days a week. The period of studying is one semester (15 weeks), that is 60 academic hours.

If you want to get certificate and 6 credit points (ECTS) for Polish language course, you have to attend 75% of language classes – 46 h (23 meetings) and write 2 tests: one in the middle of the course and the final test.

The course is open to anyone who is over the age of 18.
In order to take part in the course one has to:

The student should pay the course fee not later than one month before the commencement of the course. If an applicant resigns from admission, the School will return the course fee deducting 50 Euro. The deposit fee is non-refundable.

For participants from abroad accommodation in a dormitory is booked on request. The cost of the accommodation is paid by the student. The School does not help in obtaining visas. After receiving the application form and the registration fee (50 Euro) the School sends a letter stating that a student has been qualified to the course.

The School reserves the right to modify the way in which the course is run.